Science Project: Why women that sing the "I don’t need a man" anthem usually end up old and lonely

Tupac Shakur was probably the most influential rapper of all-time. His music will transcend all genre’s and cultures for a lifetime and he was one of the most talented entertainers to ever hold a microphone. However, he  probably had the worse influence on African-American culture in history because he was responsible for making it sexy to be considered a thug. Erasing nearly all of the self respect and dignity that those that came before him marched and died for.

His movement of Thug Life turned the game on it’s ear in the early to mid nineties. Because Pac had so much influence and leadership he was able to convince young African American women that being a thug was not only acceptable but necessary. Allen Iverson took the torch from Pac and ran with it into the NBA after leaving prestigious Georgetown University, I might add. Thus giving birth to the sexy thug baller type cat that boyz don’t even blink twice at now.

Now everybody in the league looks like Iverson did 15 years ago and Pac darn near 20. Boyz like Jordan were clean and always rockin’ a hot suit looking like a million bucks. Now these cats look like their about to rob the corner store or be the toughest guy in the nerd house on campus with the gear they’re wearing! They look like a thug on the floor and a nerd off the joint. Even corporate and college women have found it to be appealing now. Don’t get it twisted bruh, it was the poet that set the game in motion playboy!

When I was kid growing up in the “G” (Gary, In.) there were thugs and gangsta’s everywhere. There were several street gangs that converged on my high school alone. It was cool because the ball players and thugs always had tall respect for one another. Thugs liked tellin’ boyz that the athletes were their homies and vice versa. Most importantly, they didn’t holla at the same women so there was never any beef.

Now the lines have been blurred pimpin’. You can’t tell an honor student or athlete from a gangsta and the women love it. Thug cats were only able to holla at thug chicks in my day! They didn’t get the women that were in the honors classes or those that were serious about school. They passed around the same “bout it” chicks as my man Master P would say and never got into boyz lanes that were going places. As an athlete or even some regular cat, the last thing you ever thought about was some thug cat taking your woman bruh! It was impossible!

Now it’s common to see women in Corporate America dating a drug dealer or some thug type because of the influence of Tupac. How many times do you hear women say that he’s not ruff enough or that he’s too nice.

In 1993 Mc Lyte’s first Gold Album featuring the her first top 40 pop hit featured a joint called “Ruff Neck!” In 2004 even the sophisticated Destiny’s Child got in on the foolishness when they released the hot joint “Soldier” to further the case of dating a street cat! Now don’t get me wrong thugs need love too.

It’s just crazy that professional women have allowed their standards fall to the level of taking care of men or dating some cat that’s running the streets.

It’s seems to be adventurous until reality kicks in when he goes upside her head or until he dies in the street and there’s no life insurance, savings accounts, 401K, property or pension to fall back on. They’d wish that they had the nice guy then. I’ve seen it happen way too many times bruh! Trust me!!

Now let’s keep it real or all the way 100, which ever comes first! The dope game had a major influence on why thugs got in on the nice girls as well. When crack hit the scene in the late ’80’s it made it possible for just your everyday broke cat to become rich in the hood. You didn’t necessarily have to be a stone gangsta to sell crack because it was so cheap to get in the game. Therefore, many times what looks like a thug really isn’t based on what a real thug is! You’ll catch that one in a few minutes playa! When you’ve got money it’s easy to get women with low self-esteem regardless of whether they’re professional or not.

Tupac wasn’t a thug at all. He was one of the most charismatic and talented people of the 20th century. However, in my opinion, he misused his influence to promote a lifestyle that has been destructive to not only the black community but all communities. I see more suburban white kids looking like thugs than ever before now.

Notice that I’m using the words “looking like” to describe these duns. Pac said it best, “if I can influence the women first dudes will follow”. He made his music for the ladies because the fellas would bump whatever the females wanted to hear. Men will only become what women want them to become. If they wanted clean cut well dressed men, then men would be clean cut and well dressed like they were when I was coming up. You couldn’t get a woman if you weren’t “G’d up”  or “Prep” as they used to say because that’s what the ladies demanded. Now because women only want the thug look, we’ve got everybody walking around in the thug costume.

Pac was my guy but he left a legacy that many people completely overlook. I’m not saying that he wasn’t a powerful, politically savvy, outspoken individual but he was flawed in this regard. I constantly hear people give him props for his music and influence which they should, but no one has given him props for ultimately changing the the expectations that black women put on black men for the worse, which has spiralled out of control into the larger community. Now all we see is a shell of what men ought to be. Stop me when I stop lyin’!

Jay Graves is the publisher of TheJayGravesReport.com “The Sports Blog Where All The Playas Play!” Where he covers the Indiana Pacers and writes his daily Hot Joints giving his commentary of the sporting news of the day. It’s common sense sports commentary with a barber shop twist! Holla At Ya Boy! 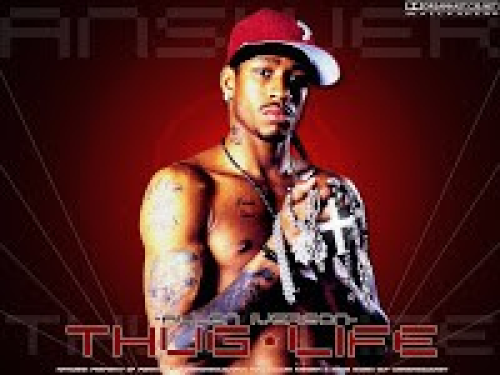 Smith: Education is not enough