Indiana has been known to have embarrassingly low voter turnout in recent years, especially in primaries, which are typically done deals on the presidential level by the time May rolls around.

Only 37 percent of registered Marion County voters cast ballots in the 2008 presidential primary. That number dropped to 21 percent in 2012, when President Barack Obama ran for his second term.

But with a still-contested primary face-off in both major political parties, the Hoosier state could wield an unusual amount of impact this time around. That’s one factor that could be contributing to a boost in early voting turnout in Marion County.

After two weeks of early voting at the Marion County Clerk’s Office, turnout was almost double what it was at the same point in the 2012 primary.

Whether the momentum continues remains to be seen, but early voting runs through May 2.

How to vote early 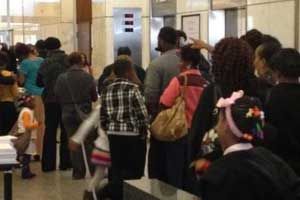 Rep. André Carson was targeted during the attack on the Capitol Jan. 6. A note written by terrorist Lonnie Coffman that categorized...
Read more

The Art & Soul Festival, hosted by the Arts Council of Indianapolis, is usually a chance for artists and Indianapolis residents to...
Read more
Uncategorized

This program is closing the opportunity gap for black and brown students. Find out how you can participate.
Read more
Opinion

Do an image search of the word “soldier” online, and the pictures revealed will be overwhelmingly white and male. However, African-Americans and women have...
Read more