Rob Dixon: all that jazz

A week of celebration begins Jan. 22 when Carmel’s Center for the Performing Arts’ Palladium officially opens to the public at a civic dedication at 11 a.m.

The Palladium is the crown jewel in the $150 million Performing Arts Center. The 1,600-seat, 154,000-square foot concert hall has been favorably compared to other world-renowned concert halls.

There will be concerts both Jan. 22 and Jan. 23 as the public takes part in the free open house.

Steven B. Libman, president and CEO of the center, said, “The community is anxious to experience this state-of-the-art hall in person. We have made sure opening weekend is packed with a lively mix of musical events open to everyone.”

The Jan. 23 lineup will feature performances by the Gregory Hancock Dance Theater at 11 a.m.; the New World Youth Orchestra at 11:30 a.m.; the Carmel Symphony Orchestra String Quartet at 1:30 p.m.; the Indiana University Jazz Group at 2:30 p.m.; and the Purdue University Glee Club at 3:30 p.m.

The celebration continues on the weekend of Jan. 29 and Jan. 30 with an opening gala for ticket holders on the 29th when there is a performance featuring artistic director Michael Feinstein, jazz artist Chris Botti, pop icon Neil Sedaka, recording artist Dionne Warwick and Broadway star Cheyenne Jackson. The gala will be produced by Hollywood producer Gordon Hunt and will include performances by the Carmel Symphony Orchestra.

Following the concert will be a dinner and a celebration that will feature five distinct night clubs within the Palladium, ranging from cabaret, jazz and high energy.

The Classics Series season debut for ticket holders will be Jan. 30 at 3 p.m. and will feature the Chamber Music Society of Lincoln Center and the Miró Quartet with Lynn Harrell.

Architect for the Palladium is David M. Schwarz Architects Inc. with local consultation by CSO Architects.

The $119 million Palladium is based upon a shoe box shape concert hall with high ceilings and massive sound-reflecting walls. The room itself, though, is symmetrical, from side to side and front to back, creating a central volume that is topped with a central dome. Beneath the dome are glass tiles attached to what looks like some scaffolding. But those tiles are acoustic devices.

John R. Hughey, the public relations manager for the center, described the acoustics of the building as encompassing. He said that while listening to music it just seems to literally surround you.

With seating for 1,600 patrons, about half of those seats are on the main floor. More than 600 patrons will have access to multiple-level box seats. There also will be audience seating behind the peformance platform.

The stage can accommodate up to 120 musicians.

To provide a sense of being enveloped by sound, side ledges for audience seating and acoustic reflection are provided at two levels.

The exterior of the building has more than 15,000 pieces of Indiana limestone. 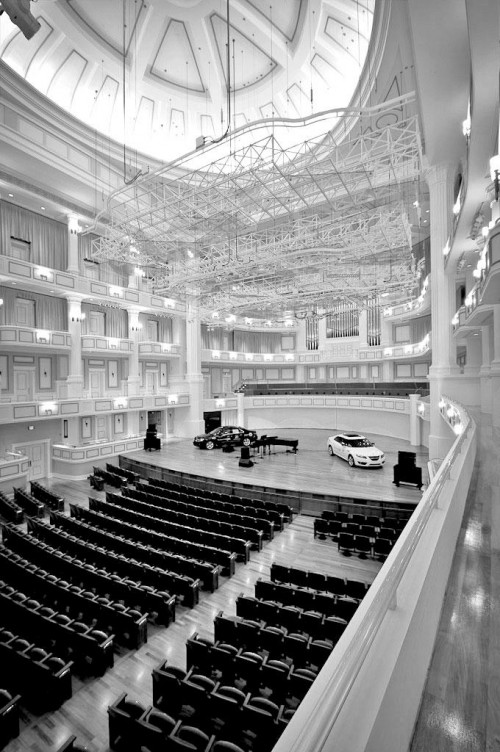