Washington loss not just to Colts, but history

Washington loss not just to Colts, but history

Let’s talk about the ‘R word’

Last Sunday, Nov. 30, the Indianapolis Colts delivered yet another brutal and embarrassing loss to the team from Washington. In my view, even more embarrassing and shameful than Washington’s 3-9 season record, was the vile behavior of their fans at Lucas Oil Stadium.

The Indiana-Kentucky Chapter of the American Indian Movement (AIM IN-KY) organized a peaceful protest outside Lucas Oil Stadium before the game to relay their message that both Washington’s “Redskin” name and mascot are degrading, offensive, and hurtful to Native people.

I joined chairmen, board members, and supporters of AIM for the protest. The behavior I witnessed ranged from appalling, reprehensible and belligerent, to inspirational and encouraging over the course of the 3 ½ hour protest.

Armed only with drums, signs and songs, AIM spread education and awareness to thousands of pedestrians en route to the game. “The ‘R-Word is Racist,” “Change the Name, Change the Mascot,” and “We are Not Your Mascots,” read some of the signs, and chants of “Hey, hey, ho, ho, racist mascots gotta go,” and “Ain’t no game, change the name,” were sung.

Some offered words of support and encouragement, others took selfies with us, but some unfortunately seemed to take great pride in their racism and bigotry.

From non-verbal racial insensitivity, such as donning a cheap plastic replica of sacred Native warbonnets (“headdresses”), to outright screaming racial slurs directly to the protesters, to, in one instance, spitting in the direction of the group–which included Native American children, as well as a Native elder with cancer who made the voyage from White Earth Reservation in Minnesota–there was no shortage of outright racism and harassment.

“Get a life!” “Get a job!” “What are you gonna do, scalp me?” “Savages!” “Don’t you have better issues to focus on?” When activists responded that they have lives, jobs, and don’t scalp anyone, the responses were usually, “Whatever,” an eye roll, or simply hurrying past.

Some asked intelligent questions, but most cowered away, pointed and laughed, or repeatedly cupped hands over their mouths shouting high-pitched shrieks in mockery.

Some argue the word “redskin” is inoffensive. However, Native skin was bound into book covers, scalps were sold for money or were gifted to the King Of England, after they were stretched over hoops by the colonists. In my view, the Washington R*dsk*ns’ team name is equivalent to naming a team the “Selma Lynchings.”

One AIM member, Kangiyuha of AIM IN-KY, stated that he was disappointed when badmouthing came from younger black folks. “I was carrying a sign that equated the ‘R-word’ with the N word.’ The guy says, ‘It’s only a word, why does it matter?’ Keep in mind, nearly all of us that were protesting were coming straight off Ferguson protests, some from Ferguson. I felt betrayed.”

However, one African-American friend and stated that after witnessing the majority of the protest, his main takeaway from it was that it doesn’t matter what side of the issue you stand, the fans’ behavior was disgraceful.

“Even if you don’t think it should be changed, why would you try to taunt people like that, and bully them? One African American guy wearing a Washington Jersey in particular was literally screaming, shouting at a Native man, that the issue was not important. If it isn’t important, why didn’t he just go into the game instead of yelling profanity in front of children. All people in general should stick up for marginalized groups, even if you aren’t part of it, but it is even MORE disappointing when another marginalized group who has also suffered abuse, turns against you or doesn’t support you; even more, to antagonize you.”

Perhaps the most unconscionable/deplorable act of disrespect and degradation I witnessed was at the conclusion of the protest, when AIM members knelt by the drum to pray. Some were in tears–deep in prayer–as a middle-aged Caucasian Washington fan passed by shouting repeatedly, “Redskins nation! Redskins nation! Keep the name!”

Thomas Pearce, Co-Chair of AIM IN-KY, summarized the event by stating, “No one got hurt, our message was heard, and I’m proud.”

President Obama said in a recent speech, “When any part of the American family does not feel like it is being treated fairly, that’s a problem for all of us. It’s not just a problem for a particular community or a particular demographic. It means that we are not as strong as a country as we can be.”

The National American Indian Movement has had a physical presence at every Washington game this season and will continue to do so. No matter what side of the issue you support, it isn’t going away, and Natives are determined to have their voices heard.

Amy Foxworthy is an Indianapolis-based writer and social justice activist. 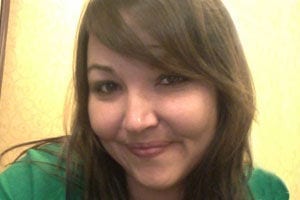