Accelerating the Generation of Wealth 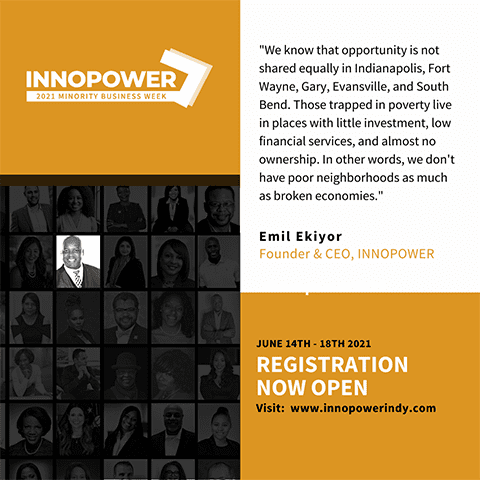 The focus of this year’s InnoPower Minority Business Week is accelerating economic development and generating wealth in Indiana’s Black communities. The event will be held in June 14th — 18th.
Opportunities are not equally distributed across cities like Indianapolis, Fort Wayne, Gary, Evansville, and South Bend. Those trapped in poverty live in places with little investment, low financial services, and almost no ownership. In other words, we don’t have poor neighborhoods as much as broken economies.
There are two leading causes of the lack of adequate and promising jobs in Indiana.  First, we have a labor pool that is not ready to fill positions in the knowledge economy.  And second, there are not enough jobs where low-income citizens live. Minority entrepreneurs can solve the second half of this problem because they create jobs in high-poverty neighborhoods.
In response to these challenges, businesses have responded in different ways. For example, a McKinsey study reported that more than 40% of minority-owned small businesses have added new services to support their communities and employees, compared with 27% of all respondents. People of color run 22% of all small businesses across Indiana and these businesses have been a cornerstone of their communities during these uncertain times.
Indiana’s 113,456 minority-owned small businesses hire more employees than the state average, which shows the importance of a vibrant minority entrepreneurial ecosystem.
Emil Ekiyor grew up in a Cash-based economy in Nigeria with few safety nets to protect citizens who fall on hard times. Emil quickly learned the value of having an entrepreneurial mindset to survive.
A startling fact is that the 2.6M Black-owned businesses in the U.S. generate less than one percent of total U.S. GDP (gross domestic product). This has to change. Another fact is that Black people have the highest level of entrepreneurial startups. One of several efforts to equalize the playing field is investment.
“To develop wealth faster, we must change the status quo. If we do nothing, accelerating the pace for which Black people achieve wealth could take generations,” says InnoPower founder Emil Ekiyor. “We must increase the overall quality of life in Black America and one of the ways to do that is through innovation and entrepreneurship.”
According to the Equal Employment Opportunity Commission, African-Americans make up less than five percent of the technology industry’s workforce in Silicon Valley. According to the commission, the percentage of African-Americans that
occupy executive positions in the tech industry may be as low as one percent and independent entrepreneurs have it just as bad as those already established in the sector.
Ekiyor was heavily influenced by his youth spent in Nigeria. Nigeria is a cash-based economy. Nigerians have just recently begun establishing a system of credit.
“There are no safety nets in Nigeria, everyone is trying to perform a transaction and there are not enough available jobs so entrepreneurship is a key part of the culture,” says Ekiyor, who moved to the U.S. as a teen for high school. “Everyone has a hustle.”
This exposure to millions of people with a hustle mindset as a youth impacted Ekiyor. Another fact of life in Nigeria is the limited access to electricity, with much of the population experiencing only four hours of power each day. For example, if someone sold goods in the market, at the end of the day they would have to sell or eat what they had left due to lack of refrigeration. This creates intense pressure, which forces adaptability in order to make ends meet. Adaptability is the essence of the entrepreneurial mindset.
When Ekiyor played in the NFL for the Tampa Bay Buccaneers, it was during Dungy’s stint as head coach. Dungy and his staff, which included Lovie Smith, were rebuilding the franchise and Ekiyor paid attention. This was an act of entrepreneurship that resonated with Ekiyor.
“We must connect the dots and focus on solutions. Even with limited resources, we can solve problems and become self-reliant,” states Ekiyor. “We have to be innovative and create solutions.”
Creating solutions for accelerating the closure of the Black wealth gap is a far-reaching topic. Grants and charity work will not solve the problem. According to Ekiyor, innovation is the answer, thus he created the InnoPower organization to promote entrepreneurship and solutions for the complicated challenges impacting vulnerable communities and populations.
InnoPower partners with many organizations, including Rooted School, Eastern Star Church, Ivy Tech, and Eleven Fifty Academy to create a talent funnel towards careers in technology.
Eleven Fifty Academy’s Chief Operating Officer, Dewand Neely, is focused on the Academy being a funnel for diversity in tech. “We are doing a better job as a team by challenging employers to look at us as a feed for their DEI. Employers should come to us to work hand in hand to become more diverse.”
Eleven Fifty Academy is a launch pad to accelerate people into rewarding and sustainable careers in tech. The Academy is working diligently to prove that tech can be the great equalizer that it promises to be.
“Entrepreneurial skills, critical thinking, and market-driven intra-prenuerial skills are absolutely critical for creating the innovators of tomorrow,” adds Ekiyor. “Tech education is a big component of our solution.”
To learn more, https://innopowerindy.com or https://elevenfifty.org