Kappa Alpha Psi Fraternity, founded in 1911 at Indiana University in Bloomington, will return home to its founding roots a year from now for its Centennial Celebration and 80th Grand Chapter Meeting.

A wide range of events and activities are planned for both Indianapolis and Bloomington that are expected to attract 20,000 Kappa Alpha Psi members, and their spouses and children from around the world.

At a July 5 press conference at the Indianapolis ArtsGarden, Kappa Alpha Psi officials proclaimed their excitement for this special centennial celebration in Indianapolis. With activities centered in the new wing of the Indiana Convention Center, plus events in the Kappa’s headquarters hotel, the new glass walled skyscraper JW Marriott Hotel, the Kappa centennial celebration is expected to generate more than $15 million in revenue for local businesses.

The Kappa celebration isn’t just for Kappa members. Kappa’s national Grand Keeper of the Records and Exchequer Al White said, “We want to invite all Greek letter organizations to participate with us.”

Organizers also have invited the Indianapolis community to the six -day convention, which will feature numerous activities that the entire community can participate in, including a health fair, a job fair, a gospel concert, R&B concert and comedy concert. National celebrities and newsmakers are also expected to attend.

During the celebration, Kappa members and their families will travel 60 miles from Indianapolis to Bloomington for activities and events, where the fraternity was founded by Diggs in January 1911.

In fact, the fraternity plans ceremonies Jan. 5 in Bloomington and Indianapolis honoring the actual founding day of the fraternity, which has some 64,000 members worldwide.

As the headquarters to many national fraternities and sororities, Indianapolis Greek organizations are excited about the Kappa Alpha Psi centennial celebration. 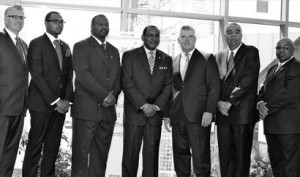