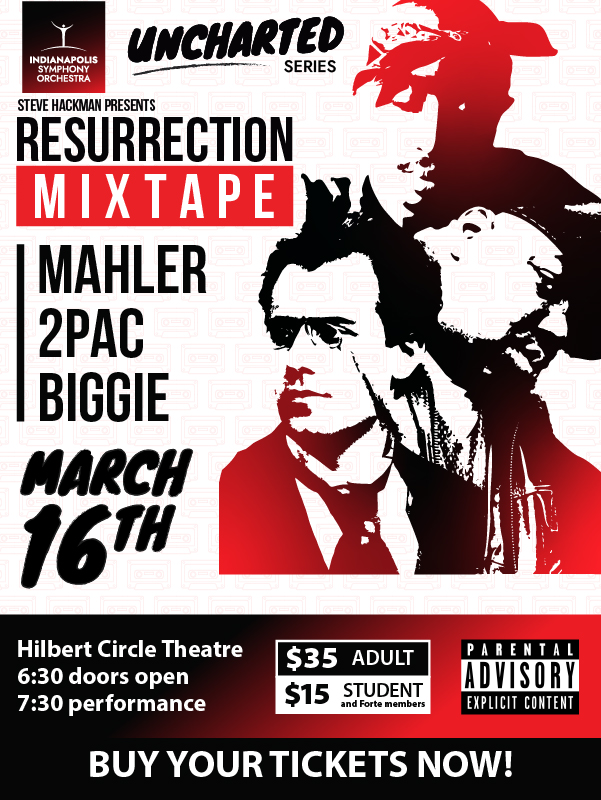 When musician and conductor Steve Hackman heard Gustav Mahler’s Second Symphony live at Carnegie Hall years ago, he dreamed of conducting that piece before an audience one day. On March 16, that dream will come true, but with a twist. With the Indianapolis Symphony Orchestra (ISO), Hackman will present “Resurrection Mixtape,” where Mahler’s works combine with that of rap legends The Notorious B.I.G. and Tupac.

The show is three years in the making, largely due to COVID-19. Hackman, who is the creative director of ISO’s “Uncharted Series,” began working on the concert in 2019, but performances in 2020 were cancelled because of the pandemic. In the years that followed, Hackman tacked on about 45 minutes to the piece, which includes orchestral versions of “California Love” and “Hypnotize,” among many more.

Hackman said attending concerts for acts such as Kanye West and Radiohead, he felt a buzz that often wasn’t present during performances of centuries old classical pieces. It was something new and exciting, and he knew there was a way to incorporate that same “buzz” into the classical pieces that he loved. That’s when Hackman — who was classically trained at Julliard and spent nights playing contemporary music in piano bars — had the idea to merge the past and the present.

“As a conductor and curator, I just feel a responsibility to present the music that is essential and indispensable,” Hackman said. “I have a running list in my mind of classical works and popular artists that I think the audiences should know, and I’m always thinking about what combinations would work.”

Over the years, Hackman has heard from audience members that his mashups have piqued their interest in classical music. When he first started this work in 2016, however, Hackman was met with a bit of resistance.

“It was understandable that the orchestral community was shocked and appalled by what was going on conceptually,” Hackman said. “This music is already perfect on its own, so to get under the hood of a Beethoven symphony and reconstruct it with someone else melded in there, people were shocked. It’s very important to me to impart to the orchestral community that this is being done with reverence and care.”

Hackman is quick to point out the many musical parallels between contemporary and classical pieces. Not only are they not that different — all music is just a differentiation between the same 12 notes — combining the two sources, Hackman said, allows them to reveal something about the other.

Ahead of next week’s performance, Hackman said studying the piece, which he describes as “extraordinarily powerful and emotional,” still gives him goosebumps.

“We’ve talked a lot about the importance of Tupac and Biggie and their enduring legacies and impact,” Hackman said. “As for Mahler, his Second Symphony is one of the most extraordinary things you’ll ever hear.”

Along with a full orchestra, “Resurrection Mixtape” will feature vocalists and guest artists from around the country. Hackman’s next presentation at ISO’s Hilbert Theater will be “Brahms vs. Radiohead” on June 1.