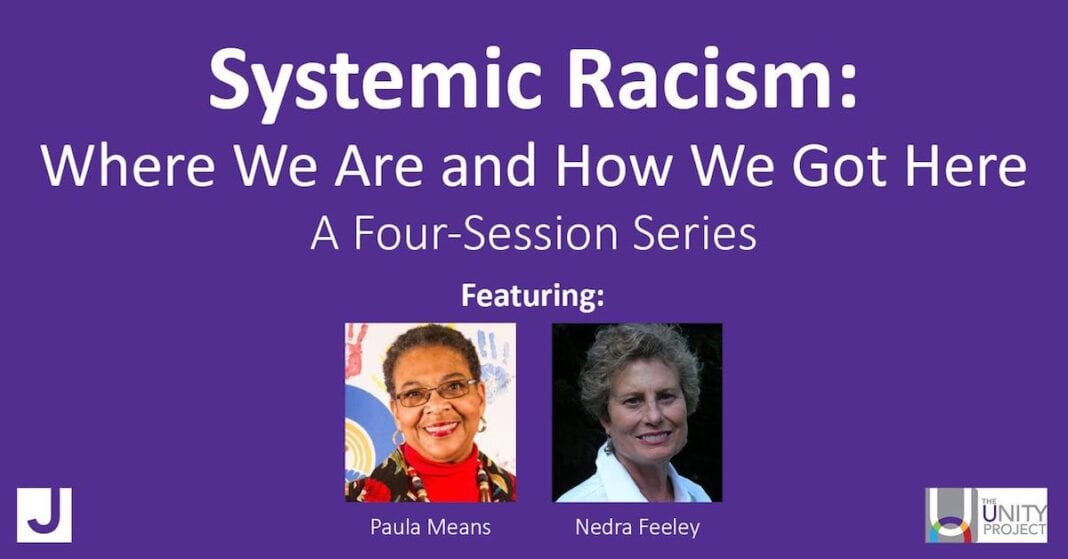 The Jewish Community Center of Indianapolis will host a series of online discussions about systemic racism to explore the role history has played in impacting people and institutions.

The first part of the series — “How Did We Get Here? What is Our History of Systemic Racism?” — is 7-8:30 p.m. Dec. 9 on Zoom and will examine the history of systemic racism. Future discussions on Dec. 16, Jan. 6 and Jan. 13 will deal with issues such as wealth and how to initiate change.

Registration for all four sessions is $15 for the general public and $10 for JCC members. Learn more here. Contact [email protected] if you cannot afford the cost.

Means and Feeley have hosted these types of conversations before, most recently after the police shooting of Jacob Blake in Kenosha, Wisconsin. The pair asked people to think back to the first time they recognized racism and if they did anything about it. What they found, Means said, was people recalled incidents, usually when they were kids, that they were only able to recognize as racist years later.

Those experiences make Means confident the upcoming series about systemic racism will include, as she said, rough roads.

Lev Rothenberg, JCC’s arts and education director, said there are many white people who don’t recognize the head start they get in America just by chance.

“I hear too many people say, ‘Look, my grandparents had nothing and now look at my circumstances. Why can’t Black people do that?’” he said. “There are systematic reasons why there have been obstacles placed in front of Black people all the time.”

This series is certainly not the first of its kind to pop up this year, especially since these types of programs became more popular with the rise of racial justice protests in the spring and summer months. One of the common themes that continues to show up, no matter who organizes the event, is the idea that in order to effect change, people need to get uncomfortable.

One of the questions Means likes to ask people when it comes to racism: How do you have motivation when someone is always trying to push you back?

She also has a slide in her presentation to show the burdens placed on Black people.

“I literally ran out of room on this pyramid I’m putting together,” she said.

The series will not just be Means and Feeley talking at participants. One of the things they learned from earlier projects is people tend to let themselves become more vulnerable — and thus honest — in an open environment, so about half of the time will be spent letting others share their own thoughts and experiences.

If necessary, Means said, they will do extra sessions to accommodate more people.

Three times a week, an Uber ride on Indianapolis’ east side helps to save the life of bright-eyed, 11-year-old Jay’Shawn Roberson.
Read more
Business

The start of a new year comes with a sense of hope, a clean slate and reflective thoughts of the past.
Read more
Community Voices

The COVID-19 pandemic has laid bare persistent, systemic racial disparities in communities across the United States, including the lasting effect of inequality...
Read more

Do an image search of the word “soldier” online, and the pictures revealed will be overwhelmingly white and male. However, African-Americans and women have...
Read more
Covid-19