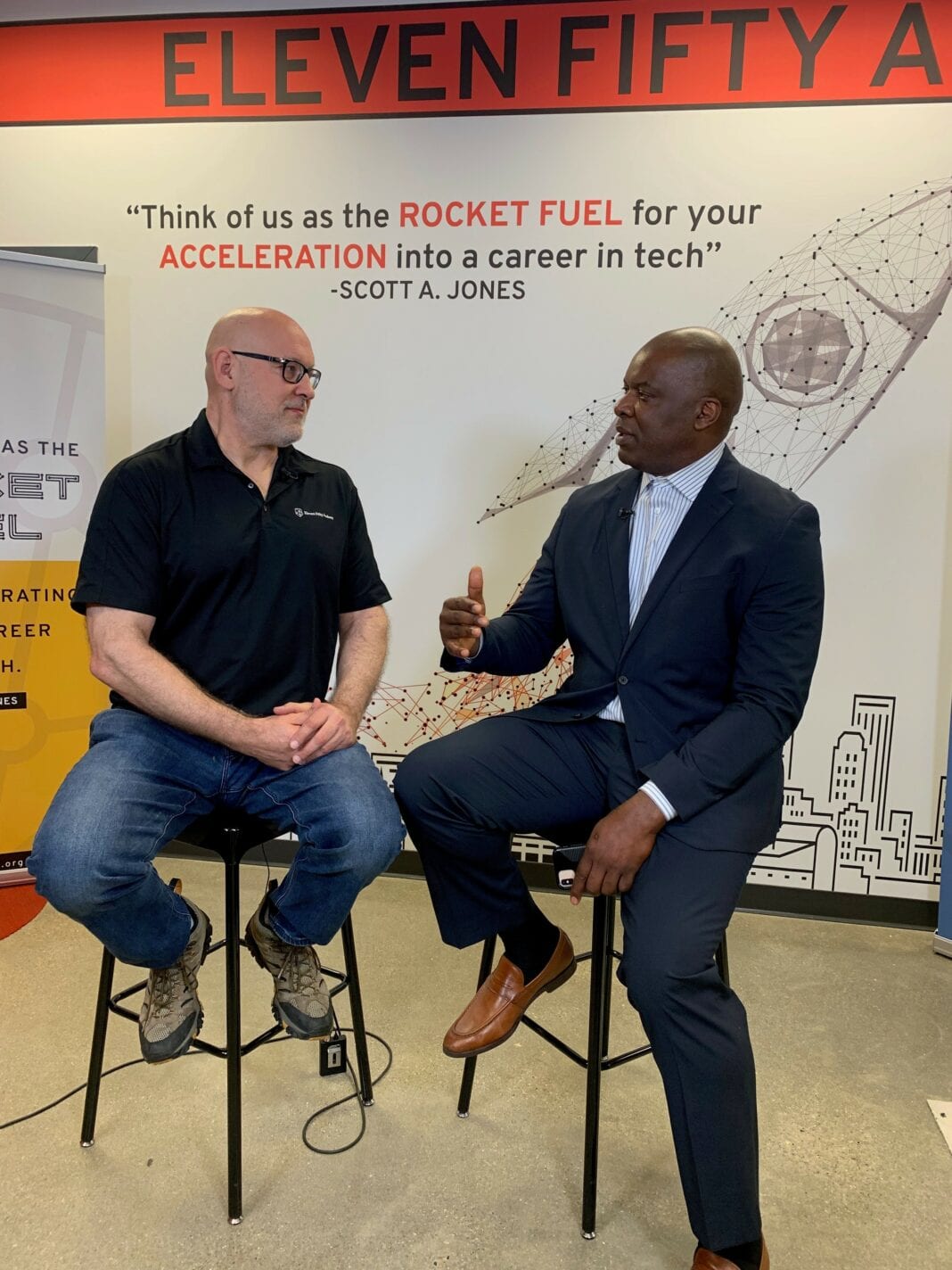 by Scott A. Jones, Founder and President of Eleven Fifty Academy

The driving force behind InnoPower is a former Defensive End in the NFL, Emil Ekiyor.
Celebrating victories is a big part of the culture within InnoPower and that’s why they launched the Minority Business Week Conference a few years ago. Over 400 people were in attendance for the Inaugural conference, and this year’s event drew over 1200 attendees. The success of the InnoPower conference proved that people of color were yearning for a shared platform to support others. Eleven Fifty Academy strongly supports InnoPower and was honored to be a title sponsor for this year’s conference.
Strong leadership is what drives InnoPower’s Minority Business Week. Emil makes it look easy to accomplish Herculean tasks. Emil left Nigeria at the age of 15 to attend school in the United States. Switching from soccer to football, Ekiyor’s leadership skills were quickly identified by his teammates and coaches. He was Team Captain for two years at the University of Central Florida, the only school to offer him a scholarship. He was picked up in the NFL draft by the Tampa Bay Buccaneers, who were then coached by Tony Dungy, Lovie Smith, and Herman Edwards. Playing for Dungy during those years was an education for Emil. Dungy and his coaching staff were rebuilding the Bucs and Ekiyor paid close attention to their planning and preparation efforts. The NFL served as a vehicle for Ekiyor’s dream, which was to be an entrepreneur.
After settling in Indianapolis with his family (Ekiyor’s wife, Andrea Sims, is a fellow alum of mine from North Central HS), Emil’s first local community engagement was coaching football at Warren Central High School. He witnessed so many young people that were not engaged so Emil created a proposal to draw in students and create a better experience. Superintendent Eugene White, then superintendent of the Indianapolis Public Schools, embraced Emil’s plan to leverage sports. Graduation rates improved.
Emil is committed to creating opportunities for youth so they discover their potential —- this is key to sparking possibilities within individuals, providing the jet fuel for creating leaders of tomorrow. What is incredible about utilizing sports for leveraging personal development, Emil realized as a coach that some students were being told for the first time they were good at something.
To fill some gaps in the talent funnel, Emil organized and created the Indy Youth Sports Foundation to leverage organized youth football as a tool to inspire young players. Every Saturday morning in the fall, over a thousand kids across Marion County do more than play football: they are building community and learning critical life skills. However, what Emil is truly providing is leadership roles for many young Black males via coaching.
Creating talent funnels is critical to helping lift our most vulnerable populations in many areas outside of sports and Emil knows this better than anyone. He works tirelessly to provide opportunities for any individual to compete for equitable ownership of the American Dream of prosperity. To further his mission, he launched InnoPower, an organization that focuses on leveraging the power of innovation to elevate Black communities. Locally, InnoPower worked with The Indianapolis Recorder, the third oldest Black newspaper in the U.S., to bolster them. The Recorder is a key partner with InnoPower. Also, Eleven Fifty Academy and Ivy Tech Community College are working alongside InnoPower with Rooted School. These organizations are creating talent funnels for people of color by reverse engineering the process. Through Emil’s efforts, he builds up communities, and creates leaders in the process.
We have a long way to go to level the playing field and supporting minority businesses is common sense for the betterment of our communities across the U.S. Emil knows that we must work simultaneously to dismantle and correct systems while we communicate a more targeted and positive message to people of color, who are drastically underrepresented both as entrepreneurs and within “new economy” tech companies.
The ripple effect of InnoPower’s Minority Business Week will be felt far beyond its final keynote speaker. Every speaker at the conference is a leader, and Minority Business Week is a celebration of those individuals who are doing amazing things. It’s up to all of us to make the path smoother for next generations.