Tahwii Spicer is all about being natural. With the help of a midwife, she had an unmedicated home birth with her son Reece, now almost 2 years old, and said almost as soon as he was born, he army-crawled up her body to start feeding.

Despite her positive experience, Spicer, who lives in Indianapolis, said examples of breast-feeding are sometimes hard to find in the Black community. “Some of us don’t have a lot of support, and we don’t necessarily see it in our own families,” she said. “We might not even have been breast-fed ourselves.”

Breast-feeding rates are increasing each year, but a gaping disparity between Black women and women of other races remains. According to data from the Indiana State Department of Health, in 2015, 82 percent of white women in Indiana were breast-feeding when they left the hospital after delivery, compared with only 68 percent of Black women.

Research strongly suggests a correlation between breast-feeding and lower rates of disease and mortality for both infants and mothers, said Melissa Bartick, an assistant professor at Harvard Medical School who studies racial disparities in breast-feeding. “A lot of pediatric infectious disease, gastroenteritis, ear infections, that is very, very strong,” she said.

Bartick said such infections are often associated with premature and low birth weight babies, which occur at a higher rate in Black women than in other races.

Other statistics indicate a connection between breast-feeding and a lower rate of sudden unexpected infant deaths (SUIDS), in which an infant dies inexplicably before his or her first birthday. SUIDS is increasing in Indiana. In 2014, 240 African-American babies per every 100,000 died from SUIDs, a 60 percent increase over the year before, according to state figures.

“A lot of people aren’t aware that Black babies are dying,” said Rosalind Jones-Jackson of the Indiana Black Breast Feeding Coalition (IBBC), which advocates for and educates families about breast-feeding. She agrees with Spicer that in many cases, the cultural framework just doesn’t exist.

“I think it’s because now we don’t have mentors and nobody ever talked about the importance of breast-feeding in the African-American population,” Jones-Jackson said. Black families in many cases didn’t embrace the shift back to breast-feeding after formula feeding began to fall out of favor, she added.

Bartick said for many families, the concept of breast-feeding is loaded with baggage related to slavery. Slave owners would force women to act as wet nurses for their children, often at the expense of their own young children, she said. That history served as a powerful incentive to view breast-feeding negatively, which was passed down through generations.

Jones-Jackson cited more immediate reasons: “Hospitals market formula (to Black women), say that formula is better than breast milk, they do some kind of false advertisement to say formula has everything.”

Jones-Jackson said that while the lack of breast-feeding knowledge among Black women perpetuates the problem, women could increase breast-feeding rates by creating their own supportive communities.

That’s what the IBBC does. Breast-feeding can be difficult and frustrating. The organization offers mothers a mentor or peer to act as a cheerleader as well as a teacher. Jones-Jackson said that could make the difference between pressing on and giving up. And having positive role models can make it more likely others will choose to breast-feed, too.

She added that anyone could be supportive, including spouses, partners and other family members.

“A lot of people have misconceptions that they have to be superwomen to do all this,” she said. “But they have to dedicate their time to the baby. When you have a significant other you’ve got to feed at home, do laundry, that’s a lot of work if you think about it. Just being able to assist her in cooking a meal or just helping her be comfortable (could help.)”

Spicer agrees: “I think it really starts at home. It was just a natural thing that you would do. … The baby has to eat.”

There are a number of local organizations and individuals working to encourage women to breast-feed, including the IBBC, the Indiana Breastfeeding Coalition and the Indiana Prenatal Network.

Minister and doula Joi Barnett is passionate about teaching women the benefits of breast-feeding. She volunteers with IBBC and is starting a nonprofit to assist women with birthing and breast-feeding needs.

Prior to giving birth to her first child at the age of 17, Barnett knew little about the birthing process and had even less information regarding breast-feeding. Experiencing three very difficult pregnancies made her interested in learning more about what could be done for both the mother and child during and after pregnancy. She had her fourth child at home with the assistance of a midwife and says it was a positive experience. Today, she volunteers for IBBC’s “Bosom Buddies” program, a support group that connects new moms with trained mentors.

Barnett’s also working to launch Birth Your Joi, a nonprofit that will help fund homebirths for women who would not be able to afford one otherwise, while providing support to families throughout pregnancy and after birth.

“I want to focus on this community and changing these trends. I want to partner with the IBBC because some women don’t hear anything about breast-feeding until they are in labor and aren’t educated about it. I want to teach diapering, safe sleep, safe bed sharing and have skills training for mothers and fathers,” said Barnett.

Barnett said some reasons for the disparity between Black and white mothers lay in how they are treated at hospitals.

“I wish I could say it was just income and education level, but if you look at college-educated, middle-class Black women, the numbers don’t get better,” she said. “It’s the way we are cared for. It doesn’t matter if we go to the county hospital or a nice, suburban hospital. They don’t take the time with us that they would with other women. They don’t have lactation support, because they assume we aren’t going to breast-feed. I believe that if we are cared for as whole human beings and not looked at as ‘here is another Black woman having a baby,’ that would play a big role.”

Barnett pointed out that Black women often don’t have as many positive examples of breast-feeding in their families. That’s why she frequents health fairs to bring not only information, but also her own friendly face to the community.

Juanita Ingram has a similar goal. The attorney, author and model was the first African-American woman to win the title of Mrs. Indiana United States in 2007. Ingram is a spokesmodel for Best for Babes, an organization that helps women of color overcome cultural and institutional barriers that prevent moms from achieving their personal breast-feeding goals. Ingram feels there is a lack of positive representations of Black women breast-feeding in the media, and she allows Best for Babes to use her image alongside their promotional materials to visually change the imagery associated with breast-feeding.

“When you see beautiful pictures that are nurturing of women breast-feeding, you don’t see Black faces,” she said. “Often, when you search for images of Black breast-feeding mothers, we are depicted in the Congo, topless, and there is an undertone of indigence that goes with it. Breast-feeding isn’t just for poor women who can’t afford formula.”

Ingram is a mother of two who said many people questioned her choice to breast-feed, from family members to co-workers. She started a corporate lactation program at work to help women overcome hurdles to breast-feeding.

Ingram thinks a mixture of positive examples and more accessible information regarding the benefits would ultimately lead more Black women to breast-feed.

“In 2007, Indiana just passed legislation that women have the right to breast-feed,” she said, referring to a law that says women can breastfeed “anywhere she has a right to be.”

“Oftentimes, there is the stigma that you will not be able to keep up with your work, that there will not be lactation consultants who know (what a) working mother needs. Knowledge is power, and when we have more information about the benefits, it dispels some of the myths that it is taboo or odd. We need to give them the information about why it’s so imperative for our young children.” 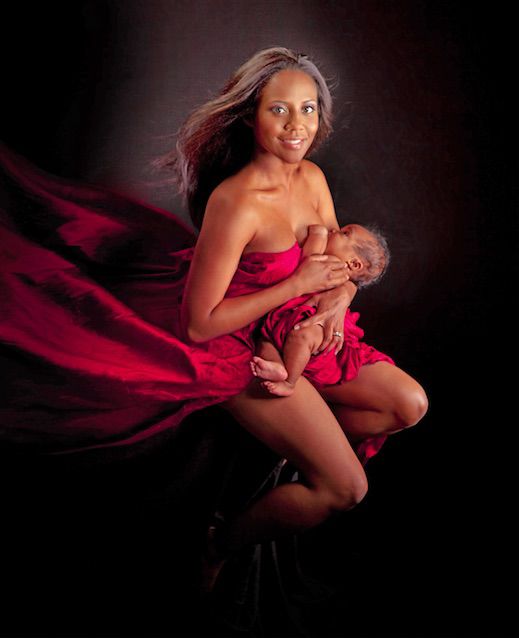