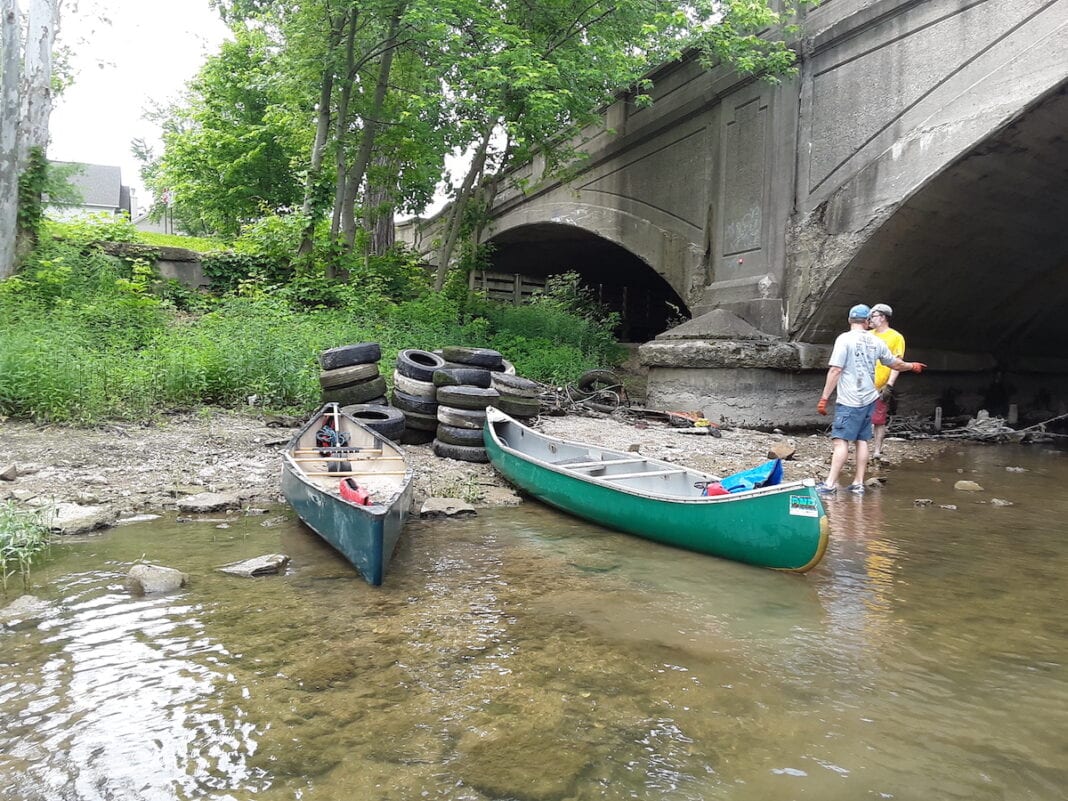 Fall Creek neighbors improving, enhancing and engaging along the waterway

Do you know what happens to that cup, straw and lid that is tossed out a car window and lands in the street? Unless you or another community member picks it up and throws it in the trash, it very likely will get washed into a nearby waterway with the next rainstorm, then taken to a larger body of water, and ultimately end up in the Gulf of Mexico. What happens in the neighborhood waterway within the entire White River Watershed begins in the streets, yards and parking lots nearby.

Many people in our community are getting busy and cleaning up trash all across the city and making a positive impact for our wildlife, aquatic life and quality of life. Here’s a few examples.

Plogging is when you jog and pick up litter at the same time. Created in Sweden in 2016, plogging has taking off around the world and can make picking up litter with friends and others in the community fun and a healthy way to be active.

The fitness team of the November Project has teamed up with Keep Indianapolis Beautiful to lead several plogging events to get outside in a safe and healthy way to pick up trash. On June 12, a group worked in the Pogue’s Run area for a plogging event that ended with the celebration of a job well done at Centerpoint Brewing. The next event is July 10 at Guggman Haus Brewing. The events include a Step Up Challenge competition for most steps plogged during the season for prizes. Learn more at www.kibi.org.

ROW’s White River and Fall Creek waterways are attacking illegal dumping in their community seriously and taking matters into their own hands.

On June 6, members of ROW’s Fall Creek Committee removed 43 illegally dumped tires from the waterway, along with a lot of trash in just a few hours and with a few hardworking volunteers.

On June 12, ROW’s White River Committee worked with 17 members of the Indiana Chapter of Backcountry Hunters & Anglers in a long, hot day of cleaning up spaces that the community has worked hard to activate over the past two years. They collected 100 tires, four truckloads of construction waste and 150 bags of trash.

Members of near west side neighborhoods of Haughville and Stringtown pitched in. Fed up with continued dumping by bad players, they now have motion cameras and motion detecting lighting to help catch them in the act and pursue fines on the dumpers.

Both of these cleanup events are part of a new effort of Friends of the White River (FOWR) to engage anglers, paddlers and even families in helping keep the waterways clean. FOWR also launched the #CleanOurWatershed program that provides supplies to small groups of people for collecting and recording litter pulled from and around our waterways. Learn more about the work of FOWR here.

There are so many examples of our waterway communities getting out in fun, creative ways to engage residents in the cleaning up and keep clean of our waterways. Here’s a few other ideas:

Millersville at Fall Creek Valley hosts a monthly Quick Litter Hitter on the third Saturday of each month. The goal is to get neighbors out for less than an hour each month in a fun, no-pressure and informal litter cleanup.

Pathway Over Pogue’s recently organized a cleanup near the soon-to-be-repaired Nowland Avenue Bridge over Pogue’s Run as a celebration for raising nearly $700,000 for this long-awaited project. There, they launched a new nature hunt project to get more neighbors engaged and excited about the future Pogue’s Run Trail.

Have a great idea for how to clean up your waterway’s neighborhood? Drop us a note at info@ourwaterways.org, or get involved in one of ROW’s waterway committees.

Julie L Rhodes is collective impact director of Reconnecting to Our Waterways.