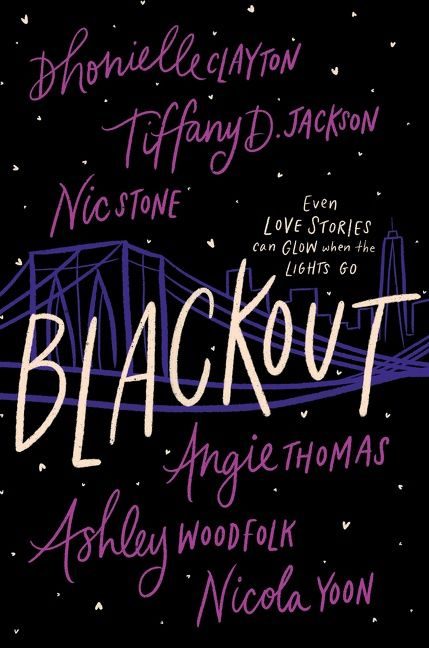 For most people, that means it’s time to sleep, but not you. Lights out means time to turn ‘em back on, pump up the music and get the party started. And for those in the new novel “Blackout” by Dhonielle Clayton, Tiffany D. Jackson, Nic Stone, Angie Thomas, Ashley Woodfolk and Nicola Yoon, it’s time to fall in love.

Obviously, there was a mix-up.

There was just one job opening at the Apollo corporate headquarters, but two candidates were offered the position and both were there for orientation. Oops.

Bad on the company. Worse for Tammi Wright, whose heart was shattered upon seeing Kareem Murphy walk into the lobby. He’d broken up with her a few weeks before, and she thought she was over him. Apparently not, but she wanted that job so she’d wait, even if she had to do it somewhere near his fine self.

And then the lights went out.

It had been stiflingly hot that day and Manhattan’s power grid couldn’t handle it. Without A/C, buildings were vacated, people milled around, and Kareem suggested they start walking home to Brooklyn. Tammi thought he was out of his mind, but he had a DJing gig that evening, do-or-die, and there was nothing else to do.

JJ Harding Jr. was on the subway when the blackout hit, but he didn’t worry until he noticed Tremaine Wright a few seats away. Tremaine was claustrophobic, as JJ knew, and he could see that Tremaine was almost freaking out. He didn’t want to intrude if the claustrophobia was a sensitive secret. JJ knew all about secrets.

The residents at the Althea House were playing cards when the blackout started, and the most beautiful woman Nella had ever seen walked into the building. Lana was trying to figure out how to tell her best friend, Tristan, that she liked him a whole lot more than just like. Kayla Simmons was sitting on a tour bus, contemplating a love rectangle.

Grace was in Seymour’s Ryde, heading for Brooklyn, and the party was about to start …

OK, yes, it’s a story that’s contrived and convenient. Yes, it’s a lot of meet-cute. It’s predictable, too, but reach a little deeper and “Blackout” is a pretty intriguing concept.

It is, in fact, the ultimate in collaboration: six authors, cooperating on one single story that arcs through six different couples on one dark night makes for an interesting tale, in part because each of the authors brings her own style to the table here. The characters aren’t interchangeable, nor are the situations, which gives readers a strong sense that the people in these tales are more dimensional. You can feel the same heat they’re feeling. You’ll believe that they’re heading for the same place and that things are gonna get even more interesting.

Then check for “Blackout” in your local YA section. Despite its strong language (but no action past kissing), it’s great for gentle romantics ages 15-to-adult, so find it … and turn the lights up.