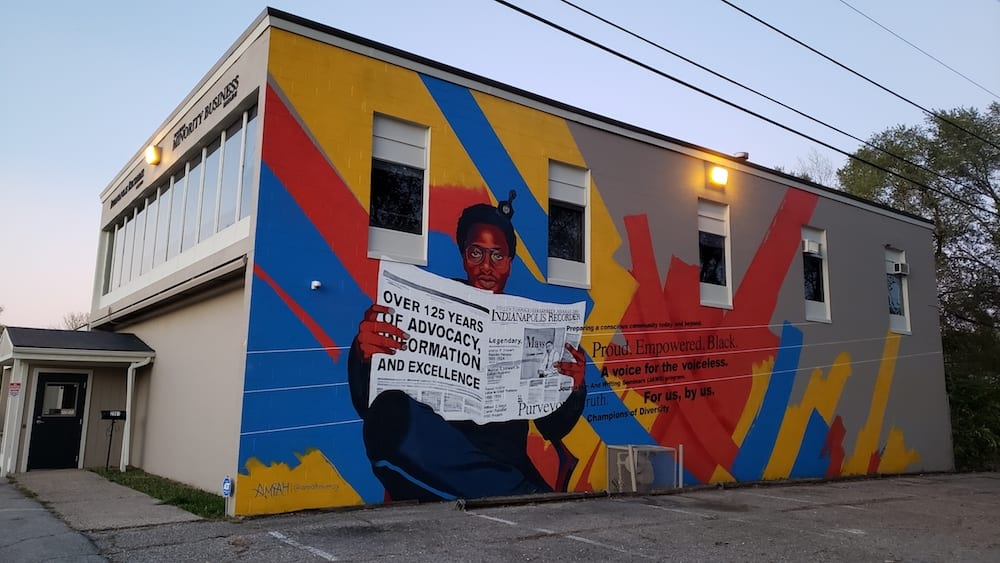 Rep. André Carson was targeted during the attack on the Capitol Jan. 6. A note written by terrorist Lonnie Coffman that categorized...
Read more
Arts & Culture

The Art & Soul Festival, hosted by the Arts Council of Indianapolis, is usually a chance for artists and Indianapolis residents to...
Read more
Top Stories

Editor's Note: This story has been updated from its previous version. As a mob of supporters of President Donald...
Read more
Local News

Gov. Eric Holcomb has a busy year ahead of him. In a roundtable discussion Jan. 5, Holcomb laid out his plans for...
Read more

When George P. Stewart and Will Porter started a two-page church bulletin in 1895, they set in motion what would eventually become one of the oldest African American newspapers in the country.

“It’s so important for the community,” Barbara Turner, great-great-granddaughter of George Stewart, said at the unveiling of a mural to celebrate the Recorder’s 125th anniversary. “And it means a lot to me and the family that it’s kept going this long.”

Like the newspaper industry itself, the Recorder has undergone many changes throughout the years. However, the sense of family and community have stayed the same

“I was a teenager when I started at the Recorder, when it was located at 518 Indiana Ave. in a raggedy old building,” Eunice Trotter, a former reporter and publisher, said. “I always had an interest in writing, and I would hang around the Recorder to see if they would let me write, and eventually they let me do some things.”

During her time as a high school student and student at IUPUI, Trotter wrote for the “Teen Talk” column and eventually started an entertainment column called “Party People.” When Trotter started writing for the paper, it was still under the ownership of the Stewart family.

“It’s so important to have representation, to give the community a voice,” Trotter said. “I’m still a regular reader of the Recorder, and it’s nice to see real, important issues being discussed.”

Trotter became the owner of the Recorder in 1988 after a stint at the Indianapolis Star. After she sold the company to William “Bill” Mays, Trotter eventually became editor-in-chief of the paper.

Throughout its history, the Recorder frequently discussed issues — nationally and locally — important to the African American community. Late historian and friend of the Recorder, Wilma L. Gibbs Moore, wrote the newspaper “commented through news stories and editorials on the socio-economic and political climate that affected the daily lives of its community. … It remains as a useful chronicle of national and local Black history.”

Current president and CEO Robert Shegog has continued to bring the important issues to a larger audience by expanding the digital presence of the outlet and forming several partnerships within the community.

“Since being at the Recorder, I have been intentional about engaging the Indianapolis community about the importance of the Indianapolis Recorder in Indianapolis,” Shegog said. “We have created strategic corporate and philanthropic partners to assist with relaying this message to the broader community.”

Shegog believes communities ought to have representation in local and national media, and that’s where the Recorder comes in. According to the Pew Research Center, the majority of American newsrooms are predominately white and male.

“The underrepresentation leads to an overdependence on white sources and a general prevalence of white perspectives in news reporting,” Shegog said. “… The messenger matters, especially in the Black community where they may lack trust in authority figures.”

Moore noted the paper covered the Civil Rights Movement of the 1960s diligently and brought opportunities for Black reporters and students in Indianapolis throughout the years.

One of those opportunities, the Journalism and Writing Seminars (JAWS), was created by Trotter to help young, aspiring journalists get experience in the field. Trotter balanced the program alongside her responsibilities as editor and called the program her proudest accomplishment while at the Recorder.

When Bill Mays bought the paper in 1990, he did so, Trotter said, to keep the paper going. Mays incorporated voices from the community, including a column from esteemed broadcaster Amos Brown, to raise readership and increase the Recorder’s presence in the community.

“Mr. Mays was a tremendous influence for the paper being around today,” Shannon Williams, former editor and president of the Recorder, said. “When he purchased it, it was in the red, and he put his own money into it and thought, ‘I might as well just buy the paper.’ He purchased it to save a legacy because he knew the African American community needed an independent newspaper.”

Williams, who began working at the newspaper in 2000, said there were many ups and downs during her 18-year tenure. However, she said she reflected on the sacrifices and courage of those who came before her, and that inspired her to keep going.

“We all stand on other people’s shoulders, and I never lose sight of that,” Williams said. “I had to remember how scared those early reporters must have been. They got death threats, the KKK [Ku Klux Klan] tried to intimidate reporters, but they kept going. Just to be able to build upon that legacy makes me so proud, and it fueled me when things got tough.”

Both Williams and Trotter agree being at the Recorder always felt like being with family. While many things have changed at newspapers across the country, Trotter hopes the paper’s presence in the Martindale-Brightwood neighborhood is the same as it was when she started working on Indiana Avenue.

“When I was at the Recorder, as a teen and adult, it was really a community place,” Trotter said. “People would come to the building and hang out, get the news of the day and just talk. That’s what a newspaper should be, and I hope it’s heading in that direction again. I’m excited to see what will happen in years to come.”

Recorder publishers and presidents through the years:

Three times a week, an Uber ride on Indianapolis’ east side helps to save the life of bright-eyed, 11-year-old Jay’Shawn Roberson.
Read more
Business

The start of a new year comes with a sense of hope, a clean slate and reflective thoughts of the past.
Read more
Business

Two Central Indiana entrepreneurs want to make it easier for people to document negative interactions with police and give civic organizations the...
Read more

Standing on the promises of God

“When God made his promise to Abraham, since there was no one greater for him to swear by, he swore by himself, saying, “I...
Read more