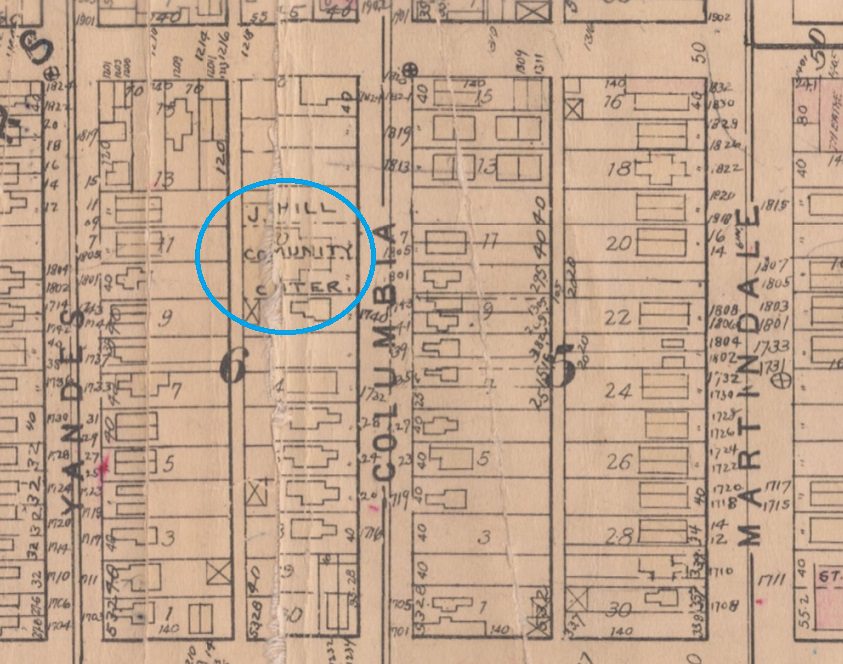 What’s In A Name, Indy? Casual racism: The Use Of A Derogatory Word

Today, the JTV Hill Park includes a number of acres of land between Dr. Andrew J. Brown Avenue and Yandes Street and between 17th and 19th streets. The initial beginning of this park, though, was on a much smaller scale. The park originally only included a community center and ground around the structure.

The map at above shows that in 1929, much of what is now parkland was a neighborhood of houses. The J Hill Community Center (in the blue circle on the map) was in the middle of that neighborhood. What is now called Dr. Andrew J. Brown Avenue was then known as Martindale Avenue. Columbia Avenue was a through street that went through the middle of today’s park.

The JTV Hill Community Center that exists today is a structure that opened in 1961. The Indy Police Athletic and Activities League, a program of the Indianapolis Metropolitan Police Department and the Indy Public Safety Foundation, operates from this building. This building replaced the original community center structure. That original building appears to have been initially a large private residence that was converted into a settlement house, the Christamore House. The history of that settlement house was intertwined with the history of the neighborhood for a number of years.

According to the nomination form for the National Register of Historic Places Inventory, dated May 2, 1984, for the existing headquarters of the organization, “Christamore House is significant as the home of the second oldest settlement house in Indianapolis and the first such institution established for the White community.” The organization was founded in 1905.

This news article explained that the local residents — several hundred white residents –— “… pointed out that the Christamore Settlement House was operated for more than twenty years … as a community house for white persons, exclusively.” The petition from these residents also pointed out that the Frederick Douglass Park had been acquired by the city of Indianapolis “for the exclusive use of colored persons and that plans are under way for installation of a swimming pool and other recreational equipment, while there is no place in the neighborhood for recreation of white persons except at the Christamore Settlement House.”

It appears the city retained ownership of the property and did not actually sell the site because an advertisement on Jan. 28, 1928, in The Indianapolis Star, requested bids for a new roof on this building for park purposes. A news article in the same newspaper on April 14, 1928, detailed that the building had been repainted in anticipation of summer recreational activities.

According to news articles dated May 25, 1928, in both The Indianapolis News and The Indianapolis Star, just about three months after the death of James T V Hill, a prominent Black attorney in Indianapolis, the Board of Park Commissioners named the former Christamore Settlement House in memory of Mr.  Hill. On May 24, 1929, the mayor of Indianapolis helped to formally open the new JTV Hill Community Center.

The Indianapolis News on Dec. 6, 1924, spoke of the dedication of the Christamore Settlement House that day — that two wings of the structure had been completed as of that date at 2400 West Michigan St.

A news article dated Dec. 11, 1924, in The Indianapolis Star provides a glimpse of perspectives of the time: The Christamore Settlement House “… is a plant whose output is ardent, loyal little Americans. Into one door is fed little children of foreign parentage — southern Europe, middle Europe, Norway, Sweden, Russia.  Out the other doors they rush with gladsome, dancing steps — little Americans.”

Integration occurred at some point, though the specific date is uncertain.  “Christamore House served only the White community in its early days,” according to the nomination form noted above, “but later expanded to provide services to Blacks [Black people], as well.” On Sept. 15, 1956, the Indianapolis Recorder included an editorial that stated “For the most part, a healthy spirit of integration pervades the Community Chest and its agencies. Christamore House is an excellent example of the races working harmoniously together …”

A legal notice from the city of Indianapolis on Nov. 9, 1960, in The Indianapolis Star detailed that the Board of Park Commissioners included plans for an 11,000 square foot structure to be built at the JTV Hill Park for $125,000.

The next month, The Indianapolis News reported on Dec. 30, 1960, that contracts were awarded for several recreational projects, including the new JTV Hill Community Center building. The contract price for the new structure was listed at $132,972.

This new building was dedicated on Dec. 4, 1961, according to a news article from the day before in The Indianapolis Star. This news article noted that the existing JTV Hill Community Center was to be torn down.

Expansion of this facility from a building to a larger park began a few years later.  The Indianapolis News on Jan. 20, 1967, included a news article that stated that the Metropolitan Parks Department of Indianapolis planned to acquire property to expand the JTV Hill Playground and Community Center. A few months later, the same newspaper reported on March 31, 1967, that recommendations had been made to include the acquisition of seven acres of land to expand the JTV Hill Park for $222,930.

The houses between 17th and 19th streets and Yandes Street and what was then called Martindale Avenue were eventually acquired and removed. The land was then landscaped as a park. Basketball courts, grass fields, shade trees, picnic tables, and playground equipment are now situated within the park.

Do you have questions about communities in Indianapolis? A street name? A landmark? Your questions may be used in a future news column. Contact Richard McDonough at whatsinanameindy@usa.com.

Photos: BLACK: A Festival of Joy